As part of our Thinking Differently About Ageing initiative we recently organised a special event at the Three Counties Hotel, Hereford to challenge negative attitudes to later life. The event gave older people a chance to put their views across on the ageing process and look at how they can contribute to society.

Too often society and the media represent older people as vulnerable or frail; relying on cliched narratives to talk about their lives, while ignoring the positive aspects of ageing. We’re empowering older people to share their stories to challenge prevailing narratives and look behind the clichés. Local MP Jesse Norman joined local organisations such as Wish Hereford and Connexus (who are experts in falls care) to hear the views of the older community.

It was clear from the day that the older people of Hereford have a lot to contribute in terms of their local community. Subjects raised included attitudes to technology, taking on the big energy companies and the importance of communication between generations.

The event is part of a year-long project, aimed at giving us a greater understanding of later life, tackle discrimination and celebrate positive ageing.

“Old age is a happy period of life. The media image is so wrong, it’s stereotyped and unhelpful to everyone, of all ages.” – Joyce Williams (Grandma Williams Blog) 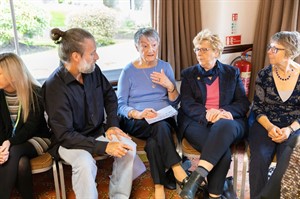 We are all growing older and as we do, we have experiences or insights that will prove invaluable to society. People have learned to dread old age and negative stories of ageing frequently drown out those which show older people as living positive, happy lives.

Older people can be invisible on social media and often feel they have no voice. We’ve given computer tablets to those over 70 so that they can upload and share their fascinating stories for younger people to see the reality that later life can be a joyous time. It is really nothing to fear.

The Thinking Differently About Ageing project is organised by Action For Elders and supported by the People’s Postcode Trust. For further information email: info@actionforelders.org.uk

If you would like to get more information about what is going on at Action for Elders and the exciting developments in our activity to improve old peoples' lives.